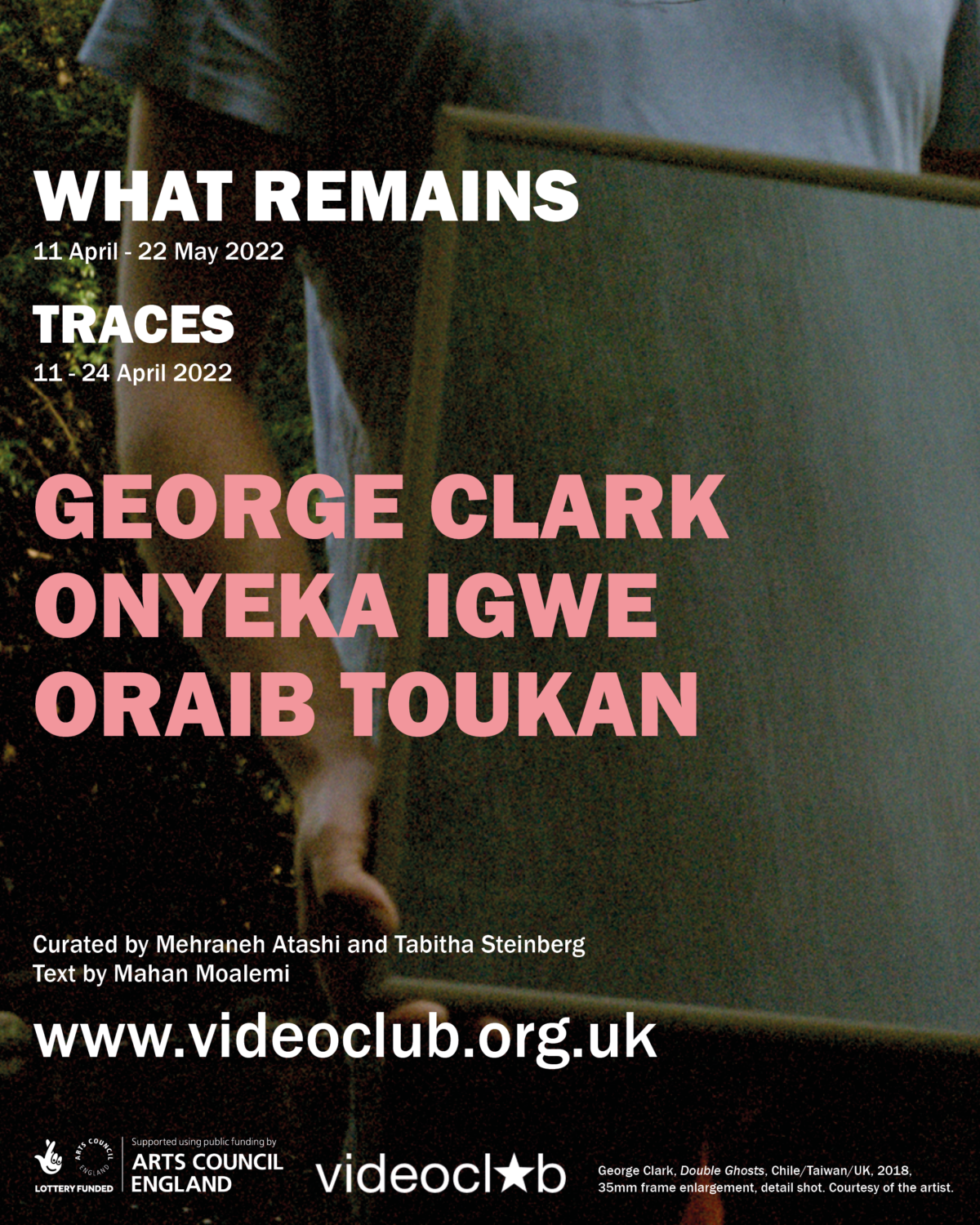 My film Double Ghosts shows in Part 1: Traces alongside Onyeka Igwe’s No Archive Can Restore You and Oraib Toukan’s Place of the Slave from 11 April – 24 April 2022

What Remains is an online film and events programme curated by Mehraneh Atashi and Tabitha Steinberg for moving image platform, videoclub from 11 April to 22 May 2022. The programme showcases nine artists using moving image to explore collapsing relationships between history, documentary, fiction and reality.

What Remains is divided into three sections – Traces, Closeness and Forwards. Each section includes three films available for two weeks over the programme’s six weeks. Traces features artists exploring archival material to reflect on and re-imagine historical remnants. Closeness features artists exploring their own personal, familial and genealogical histories. Forwards features artists examining how technology has affected the way we view and engage with history and reality today. Although following a loosely methodical structure, What Remains explores the relationship between its sections to reflect its own inquiries into expanded notions of history.

The programme brings together artists of varying backgrounds, identities and artistic concerns, following the artists’ own investigations into multi-narrative stories and cross-linear timelines. This foregrounds connections between disparate methodologies and geographies in new and transformative ways. 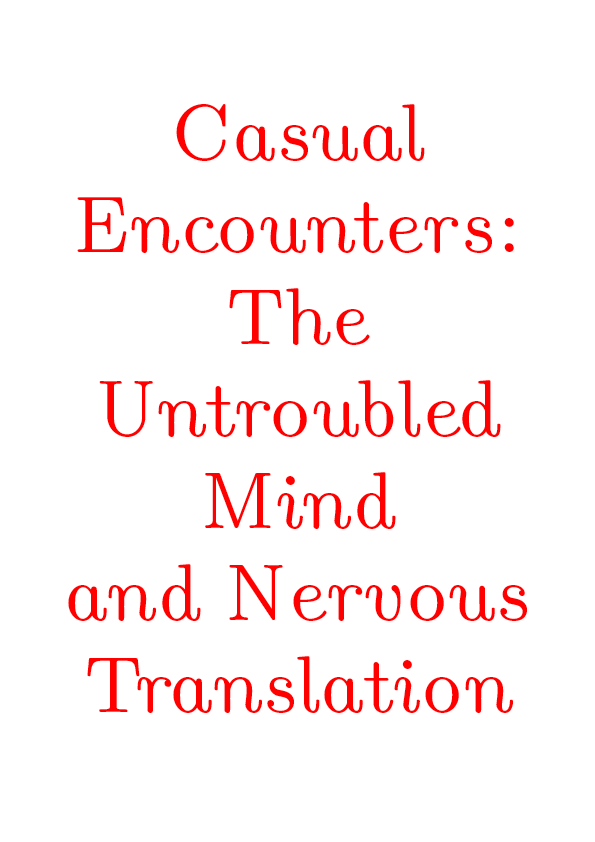 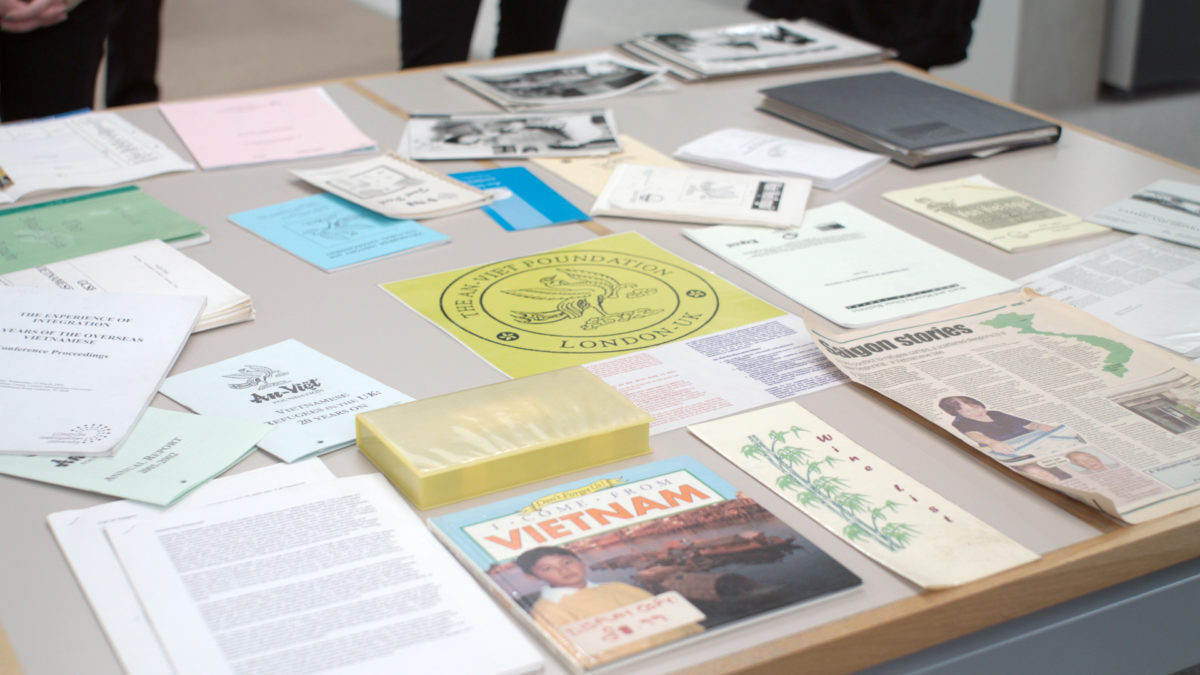 In February 2022 the Mayor of Hackney, Philip Glanville, visited the An Viet Foundation archive, the largest known collection of British-Vietnamese historical documents, currently stored at Hackney Archives. The visit was arranged to discuss the work being carried out by a team of local heritage specialists, including archivists, conservators and volunteers, to preserve the records co-ordinated by Hackney Archives and the An Viet Foundation steering committee of which I am a member.

I am delighted to be able to personally support this vital project. Seeing for myself the great work being done by the team of archivists, conservators and volunteers at Hackney Archives was so powerful and their work in preserving this important collection is crucial to ensuring we remember the long contribution of the Chinese, Vietnamese and other South East Asian communities to the borough and its economic and cultural life. It also helps us tell the stories of our proud and diverse migrant history so that we can cherish them for future generations in Hackney. It is a reminder to us all of the deep challenges many communities faced as they built their home here. We’re grateful for this fund which will help us work with the community to stop the loss of this valuable heritage, keeping these chapters of our past safe and accessible to everyone. – Mayor of Hackney, Philip Glanville

The visit and discussion were documented as part of long-term film project Handle With Care exploring issues of the invisible labour around two distinct archives, the An Viet Foundation in Hackney and the Vietnam Film Institute in Hanoi supported by British Council’s Heritage of Future Part project in Vietnam and TPD Centre for the Development of Movie Talents. This archival show-and-tell was arranged by the Hackney Archives (Etienne Joseph and Diana Le) and the An Viet Foundation steering group (Tamsin Barber, Jabez Lam, Kim Lau, Cuong Pham, Georgina Quach, Vicky Sung, Moi Tran, Toan Vu). Thanks to the archive staff, National Conservation Centre, volunteers and fellow members of the steering group.

Further details on the ongoing work to preserve this invaluable collection can be found here Brighter Future Ahead for the An Viet Foundation Archives . 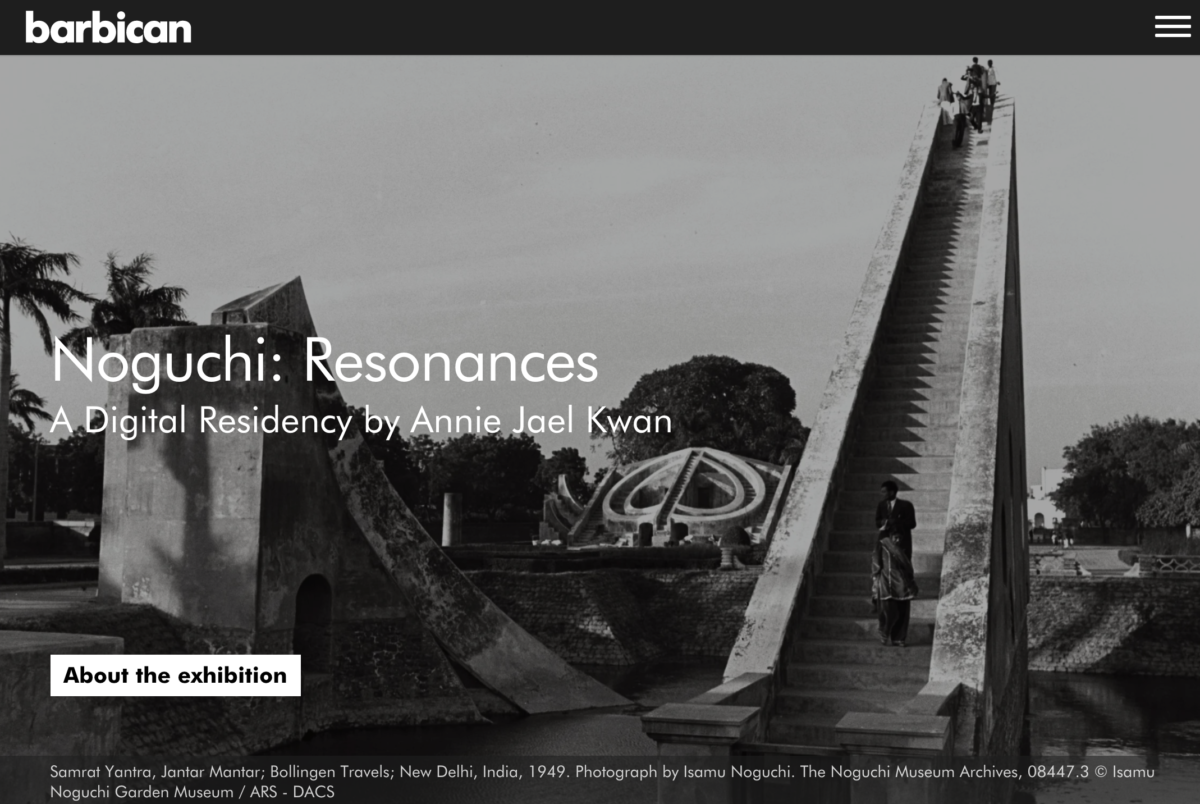 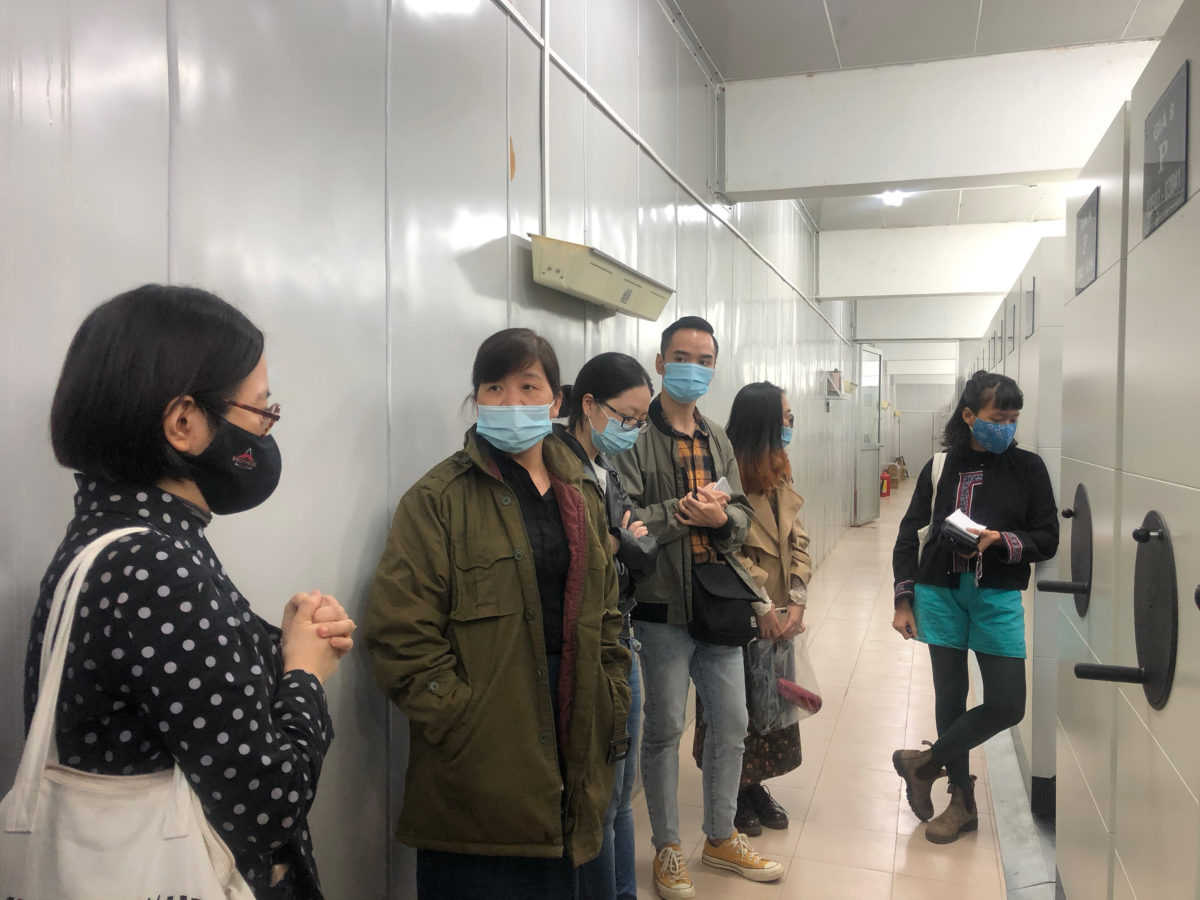 As part of the ongoing project Handle With Care, this series of workshops for TPD curatorial group in Hanoi, explored expanded concept of archive supporting ongoing research and curatorial projects with Vietnam Film Institute devised with curators Trần Duy Hưng and Truong Que Chi.
Workshop 1: Reconstructing the archive part
This session will explore ways archives can be approached and explored to reveal their underlying structures – building on work of essay filmmakers we will explore models of critical engagement to explore the historical function of the archive and ways it can be creatively reimagined and reconstructed.

Workshop 2: Reconstructing the archive part
Following our opening discussion this workshop will be focused on creative ways we can reconstruct and reconsider the archive. The workshop will be structured around the experiences of FC1curatorial participants who will be invited to bring and share materials and reflections from their initial time in the archive – looking at materials from their research, life and memories to explore the entanglement of the archive with their own impressions, feelings, dreams and futures.

These workshops are part of ongoing curatorial programme building new curatorial models for archival film in Vietnam. The first workshop I did with students was Neither For Nor Against in January 2020 and following by Moving Image Ecology Workshop  in September 2021. These workshops are part of longer course run by Trần Duy Hưng and Truong Que Chi over 2020 and 2021 that have informed and fed into Handle With Care project.

Supported by British Council Vietnam, and supported by Hải Anh and Nguyen Hoang Phuong from TPD. 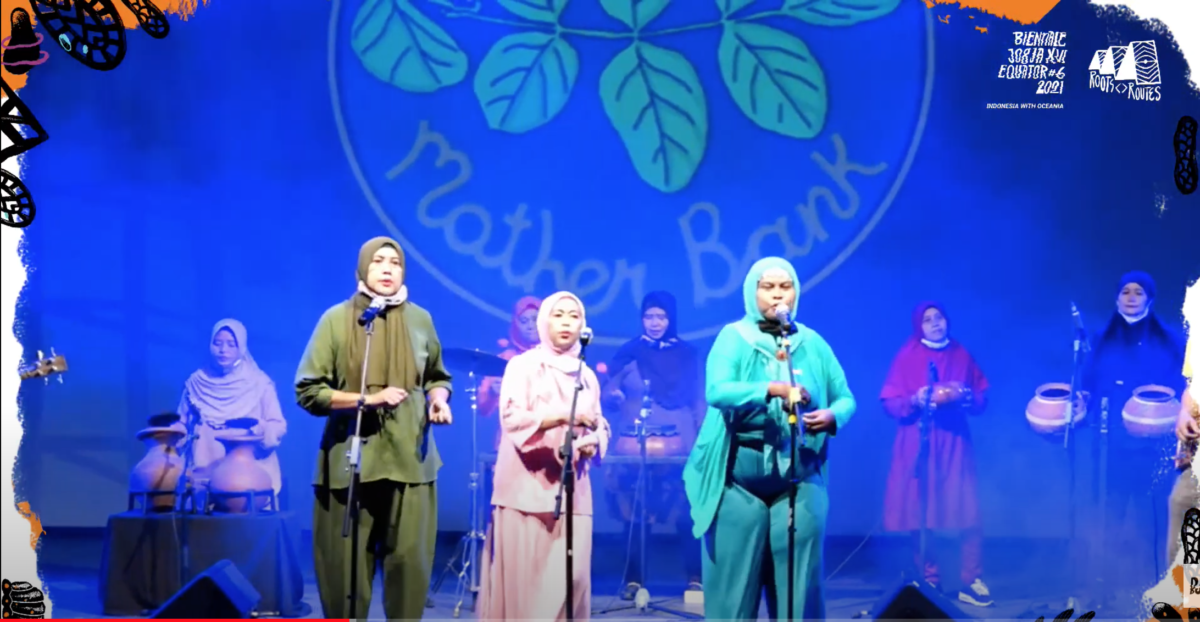 Mother Bank was presented at the Biennale Jogja XVI Equator #6 including debut performance of the Mother Bank Band on the opening night of the Biennale on 6 October 2021. Mother Bank is the latest collaboration of Badan Kajian Pertanahan / Land Affair Study Agency and West Java West Yorkshire Cooperative Movement. 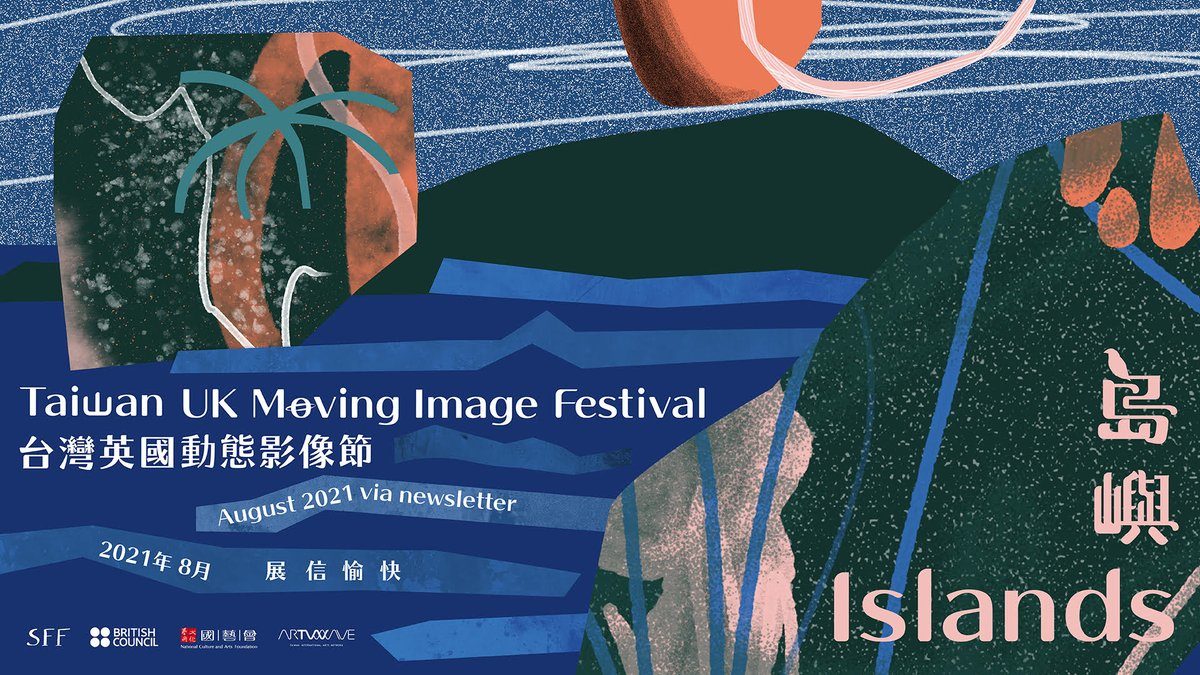 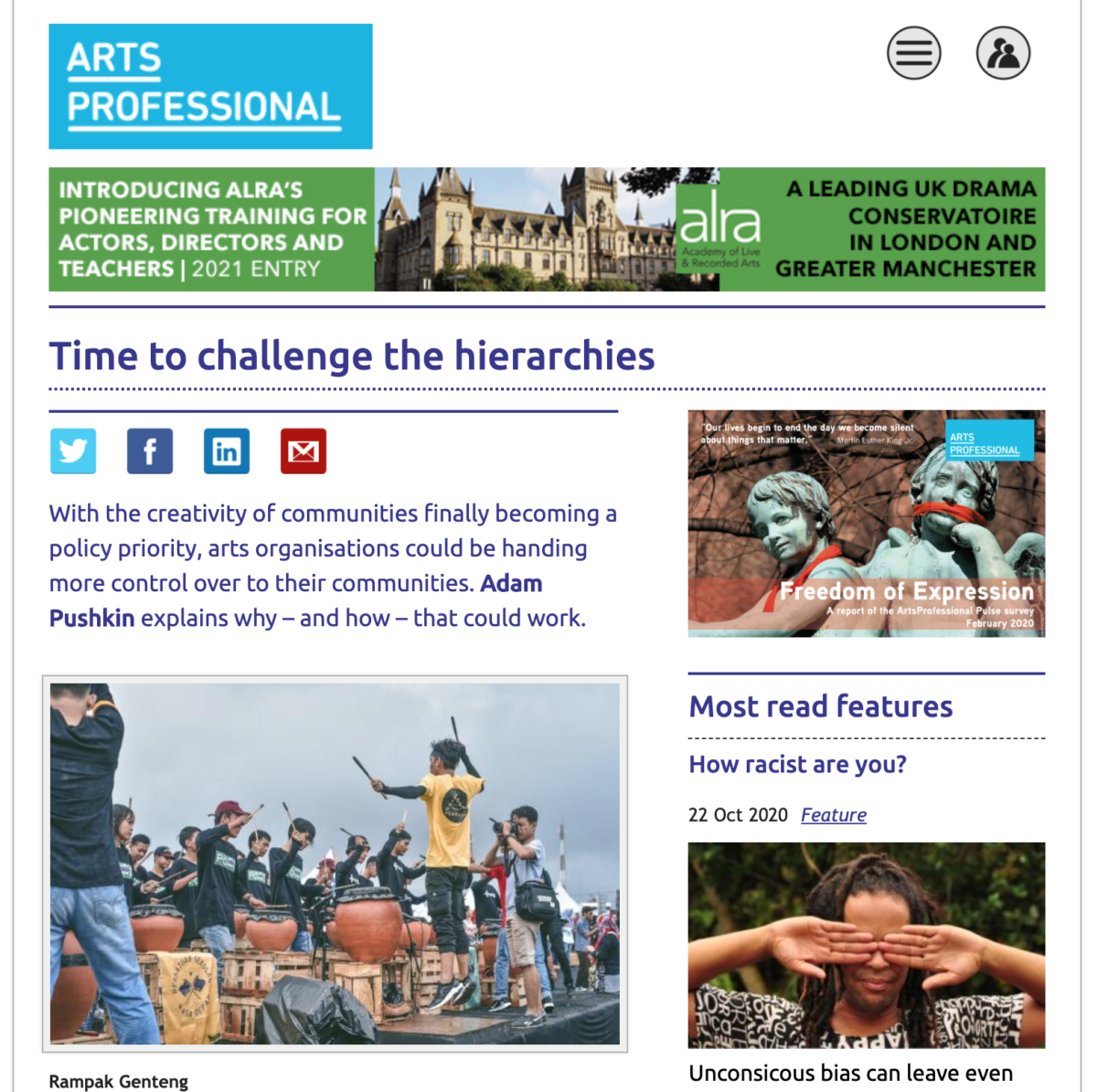 Article by Adam Pushkin explores the art scene in Indonesia and the lessons to be learned from their models of collective practice. The West Java West Yorkshire Cooperative Movement is highlighted alongside interview with George Clark and Ismal Muntaha.

For Jatiwangi Art Factory (JAF) the approach of Let’s Create would sound familiar. Jatiwangi is a small town known mostly for its ceramic industry. For decades it produced the roof tiles that were used across Indonesia and JAF’s work engages with the changing industrial and social landscape of the town. According to Ismal Muntaha, based there since 2009, JAF is “not working for the community, it is part of the community”. The vibe is that of an extended family: everyone lives together, eats together, creates together.

UK artist George Clark has been to Indonesia twice in the last three years and has forged an ongoing relationship with JAF. He was fascinated by what he saw as a horizontal structure rather than the hierarchical structure present in the UK. This structure isn’t just about decision-making – although Ismal tells me that when decisions are needed, they are usually made collectively – it’s about a fluid way of working: “artists need to be community organisers, cooks, carpenters… and those skills are not held hierarchically”. Or as Yuki Aditya of Jakarta-based collective Forum Lenteng told me, “everyone’s job description is something fluid, where everyone can fill any position depending on the needs of the program or of other people”. 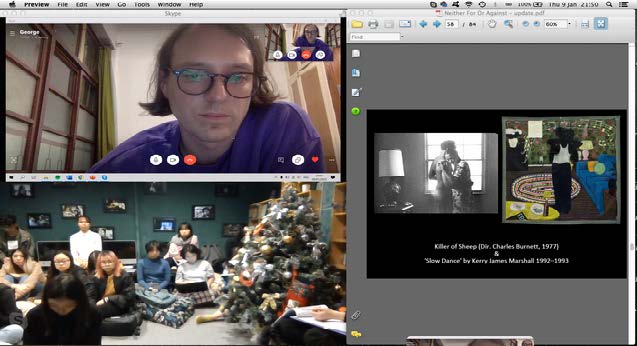 Neither For Nor Against
Moving Image Ecologies: Cinema, Archive and Factory
TPD Hanoi, 9 January 2020 and 9 September 2020

This was first of a series of talks I gave as part of the Film Curating programme 2019-2020 ran by the TPD Centre for the Development of Movie Talent (TPD) devised with curators Trần Duy Hưng and Truong Que Chi.

The three-part talk reflects on the connections between conceptions of cinema as place of exhibition as well as creation and site of invention. It looks at origins of film archive and models of curatorial practice for film, from origins of cinema to contemporary time. Finally, it reflects on how artists navigate between these fields drawing on discourses of cinema, visual arts and archive to find new possibilities for means of working with with legacy of film industry, from essay film to installation.