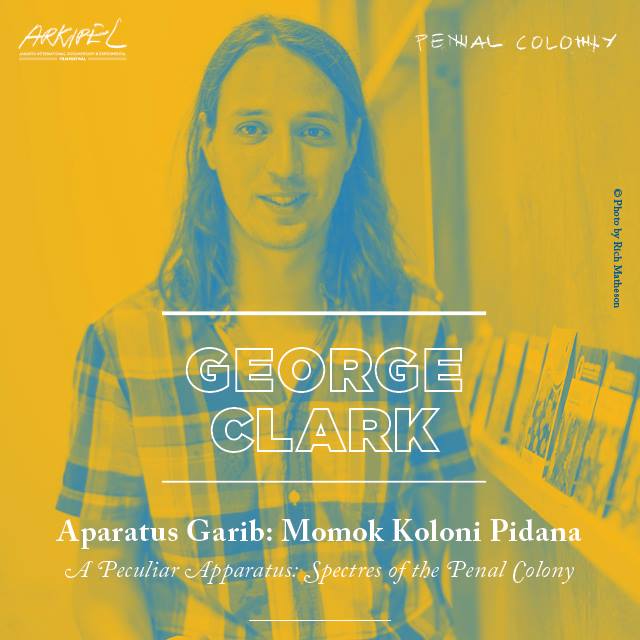 You’ve seen yourself how difficult the writing is to decipher with your eyes, but our man deciphers it with his wounds.
– Franz Kafka, In the Penal Colony, 1919

The apparatus described by Kafka in his piercing short story In The Penal Colony, is an instrument of punishment and control. Only at the point of death does the condemned realize their crimes; in an aesthetic epiphany the sentence and crime are finally comprehended by their body from the words carved into their flesh. The story presents a land governed by a clear yet horrific logic. Leading us to ask what exactly is the “peculiar apparatus” that the story describes? Is it the machine of torture and punishment? Or instead could we understand the apparatus to be the logic which invented and implements it?

This programme will attempt to reflect on this peculiar apparatus; to think about the machine as the logic of power, of nationalism and colonialism. To explore these ideas, I will present a pairing of works drawing connections between two very different places; Taiwan and Chile. These territories, on the opposite sides of the Pacific Ocean, are the focus for a new film project I am currently researching, on the one hand I am exploring the machinery of cinema and photography and on the other the mechanisms of power. With this programme I propose to explore the entanglement of these places through work of two artists: Raúl Ruiz (1941-2011) from Chile and Chen Chieh-jen / 陳界仁 (1960- ) from Taiwan.

Sea of Clouds is structured around an interview with contemporary artist Chen Chieh-Jen. The film explores the relationship between film, landscape and rural life and the layered histories of these sites as places of self-organization and resistance. Built around the question of translation and the relationship of what we hear to what we see, the film follows Chen’s retelling of the farmer’s tradition of using film screenings as means of covert political assembly during the Japanese colonial rule of Taiwan. The title 雲海 / yúnhai is term to describe the view from Taiwan’s highest mountains when everything below is hidden from view by a sea of clouds.

“A foreign journalist arrives on a small Pacific island 200 miles off the coast of South America. Once a leper colony, the island was later transformed into a prison and then, under U.N. mandate, made into an independent republic. Yet despite democratic structures, the inhabitants – who speak a strange dialect composed of Spanish and English – still obey the old prison rules. After sending back detailed accounts of the torture and repression seen everywhere, the journalist realizes that she’s fallen into the trap created for her by the islanders: lacking natural resources, the island’s main export is news. The Penal Colony is a powerful document of the tensions and contradictions in Chile” – Richard Peña

“Taiwan’s Martial Law provisions included laws clearly suppressing assembly, demonstrations, and the forming of organizations. Nonetheless, one afternoon on a holiday in 1983, five youths appeared on Ximending Street dressed in white khaki pants and wearing cotton bags over their heads. They walked, shoulder-to-shoulder, from the Red House to the Wannian Theater, attracting the attention of a growing crowd of onlookers and putting the police headquarters and reserve plainclothes officers on alert. When they arrived at their destination, they immediately began howling and screaming as if they were in great pain, except for one of the men, who quietly lay supine on the ground. That man was Chen Chieh-jen.“ (Fang-Tze Hsu, 2013)

Untitled (Eyemo rolls) is an ongoing film project made of discrete 100ft 35mm reels. The project exists in dialogue with other works and is designed to be shown in the gaps between other films. Rolls #87-92were filmed on Green Island, a volcanic off the eastern coast of Taiwan originally inhabited by the indigenous Amis people. During the martial law period in Taiwan 1949-1987 the island served as the administrations penal colony for political prisoners.

“I did a film, Voyage of a Hand, of which the pretext was the testing of a frontal projection system. I gave texts haphazardly to the actors, shot by shot. And the story began to take shape by itself, like the way one writes, in an instant.” – Raul Ruiz, 1987

Voyages d’une main (1984) is a fantasy of 19th century travel, loosely adapted from writings of Honoré de Balzac and Jan Potocki. The film critiques the adventures of Europeans in exotic colonies, tracing the alienation and descent into insanity of its protagonist.